Rio is a multi-faceted city. Certainly tourism and the beach are clearly marked with Carnaval being a mix of native culture and a bit of tourism. Lapa on the other hand is a facet that makes Rio a party city like no other. São Paulo doesn't party like Lapa. No American city could possibly party like Lapa. Since I took no photos (because I was trying to enjoy the party instead of documenting it) I will try to describe it. Start with multiple crowds of people in the street. They are blocking off the streets around Lapa's main attraction, Arcos da Lapa, an aqueduct made in the 18th century (1780s). Take floats playing music. Then add twenty or thirty clubs that are packed to capacity and have long lines. Then play Brazilian funk in a party that it so packed that it's instantly claustrophobic. Then add hundreds of beer vendors on the street selling beer for approx $2 USD. This wasn't the bloco, but it was partially caused by it. The bloco was much larger and went down Rua Rio Branco.

Beyond Lapa, there is the party that spans all neighborhoods. This is not a public party and it isn't specific to Rio. It's smaller in São Paulo but exists there as well. Wherever there is a good bar, people around gather and have a party. In typical Brazilian fashion, everyone knows everyone else in their clique and outsiders can only get in by meeting someone. Once they've verified that you are cool and not a gringo, you're in. In my case, they verified that I was a gringo but not just a stupid tourist. How does that happen? I am writing an extensive essay on the strengths and weaknesses of Brazilian social networks from the point of view of a novice Brazilian Portuguese speaker. I haven't gotten conclusive results and examples, but it will be an interesting read.

But more to the point, what did I actually do in Lapa? My friend and I met and talked with some cool people. There were a pair of college students who were really nice and went to Lapa to enjoy themselves. There were the pair of girls who were really interested in my friend and me. One spoke Japanese, so I talked with her for a bit. I forgot all my Japanese on the spot though. Similarly later in the night, a girl asked me to sing and I forgot all the songs I know. Wouldn't it have been cool if I had sang "I'm an alligator, I'm a mama papa coming for you, I'm the space invader, I'll be a rock 'n rolling bitch for you. Keep your mouth shut. You're squawking like a big monkey bird and I'm bustin' out my brains for the words. Take me baby, make me know you really care, make me jump into the air. Keep your electric eye on me babe. Put your raygun to my head. Press your space face close to mine love. Freak out in a moonage daydream oh yeah." -- Ziggy Stardust and the Spiders from Mars "Moonage Daydream". Of course I forgot it. Instead I sang a few lines from Frank Sinatra's "You brought a new kind of love to me" and Gilberto Gil's "Oslodum". I taught myself these songs when someone asked me to sing last year and I blanked. Of course I completely failed to sing in tune because I was a bit drunk. But we talked for a bit about rock, what types of things we were interested in. My Brazilian Portuguese may be awful, but I can ask and answer dozens of interesting questions. If you've ever played 20 questions, you know that by the end, you know the person a bit too well. Let's play shall we?

The green text below contains hover text with the Brazilian Portuguese translation.

Only a handful and all in low resolution, but the beach is worthy of a picture or two. I'll get more photos uploaded as time goes by. I went swimming this morning. Almost no one was out there. By 2pm everyone was on the beach. You know what I said about Rio's Rainy Season? It turns out that today is sunny, but the last two days were rainy. Tomorrow is looking good too. Is it too soon to say that it's the rainy season? Laundry is finally done and I'm doing well. I sent a postcard to a few of my friends. I would have sent more but I didn't think of it. I'll send a few from São Paulo. I'm extending my stay in Rio so I can go to a few parties with friends this weekend in Rio. Rio is actually a good place to send a postcard saying "Wish you were here." because it is a beautiful beach. 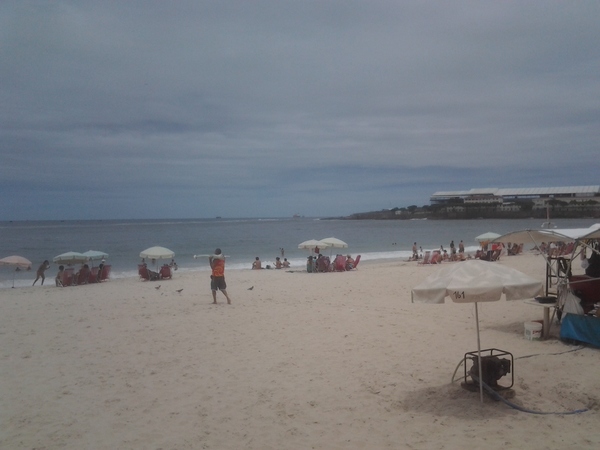 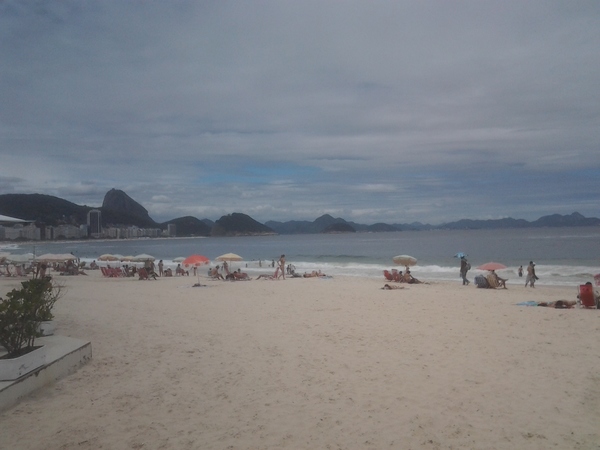 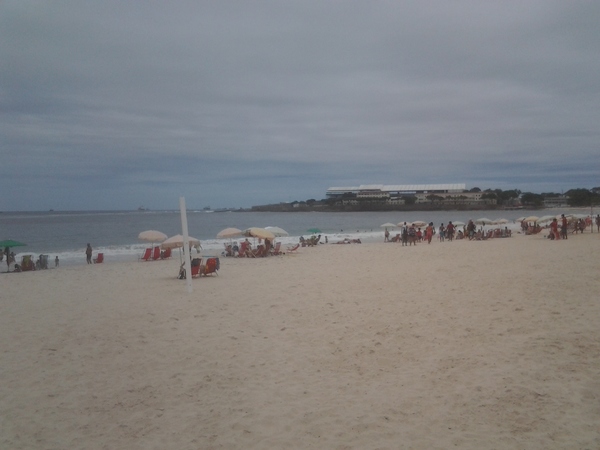 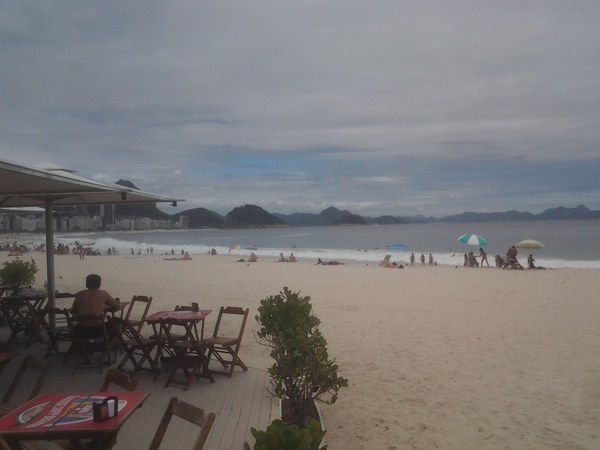 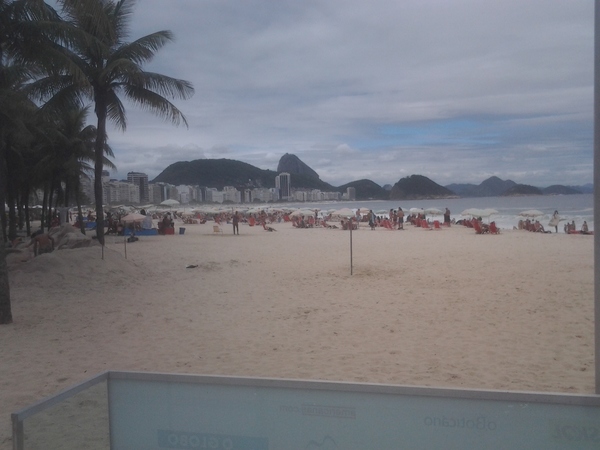 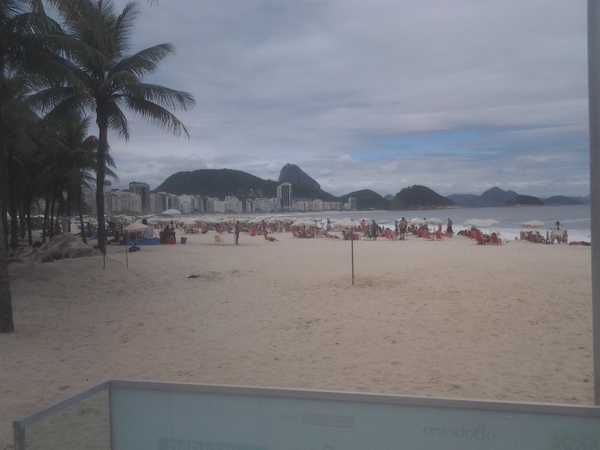 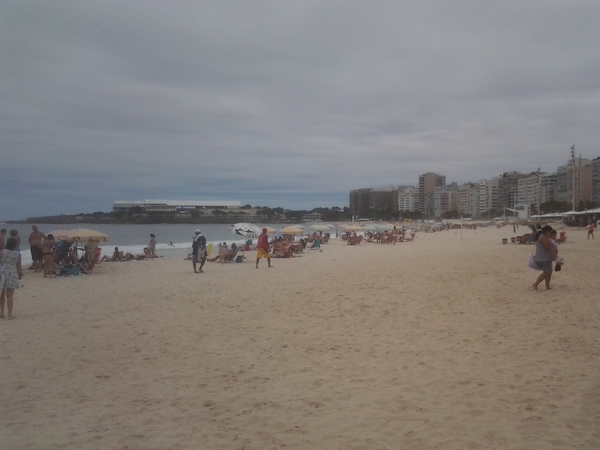 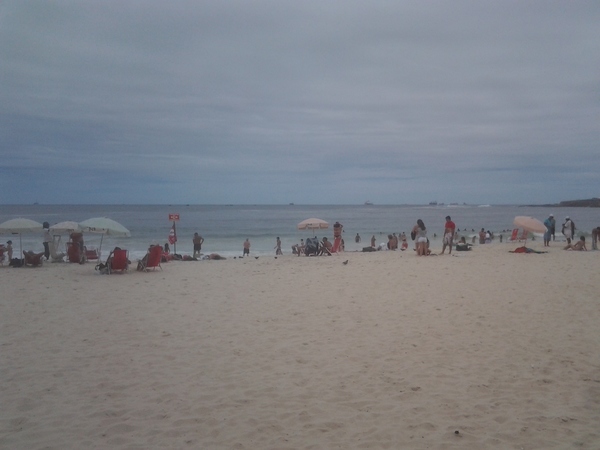 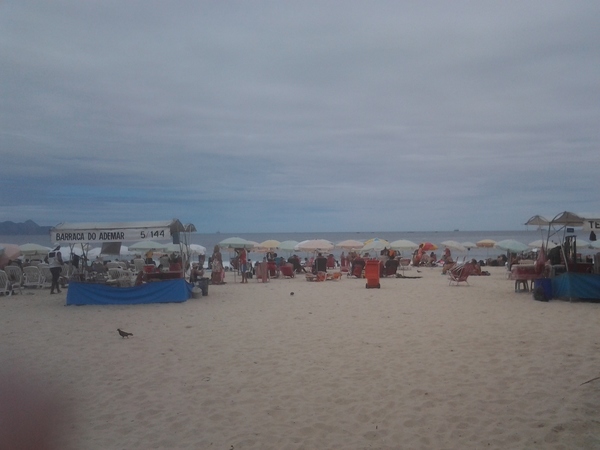 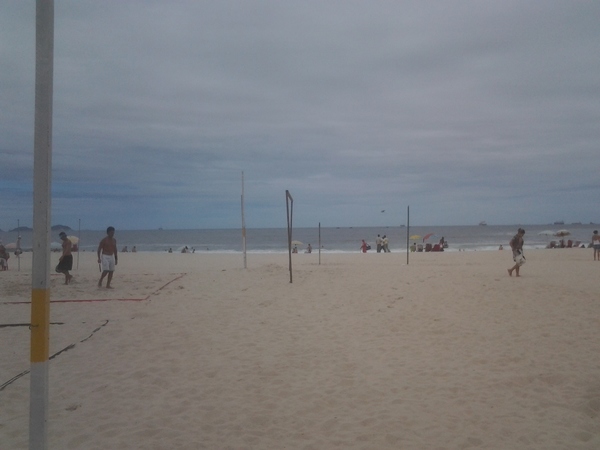 It's the weeks leading up to Carnaval in Rio and it's the rainy season. It's raining. It's warm, but not too warm. Do you swim in the beautiful ocean when it's raining? Sure, why not? I haven't swam in the ocean yet, but I will. I haven't seen Cristo Redentor yet, but I will.

A new friend told me about Blocos in Rio which will be interesting. Blocos are a block party with tons of people in the street. The music is samba. It's something pretty unique. My friend told me that between Christmas and Carnaval is pretty much mired by parties. Imagine the entire month of January being a slow month because people are partying too much. I could deal with that. In Seattle, January is a fairly slow month usually because it's too cold. But that's never stopped me from working, mostly it has stopped me from partying.

Lavandarias. It's time for a talk about laundry. I'm wearing swimming trunks right now because of a laundry problem that has been following me since Friday. I've been wearing dirty clothes for 4 days now. You can blame this on me not being prepared, but that's not the real story. I have 4 sets of clothes. Like my father said, "shirt/pant/short/sock/day". So on Friday I have one set of clean clothes. Time to do laundry, right? It's São Paulo's anniversary, so the lavandaria is closed. No problem, they'll be open tomorrow. Saturday I show up on their doorstep and they are closed again. I go to a different lavandaria six blocks away. They quote me 100 Reals ($50). I'm ready to pay the extortionary rate because I don't want to wear dirty clothes for 2 days. They say, your clothes will be ready on Monday morning. It's 10am on Saturday. Could you please finish them by 5pm? Não. I lost it quietly and walked out of there with my dirty clothes. 100 Reals and 2 days? Remember that laundry in America involves $5 in quarters and 1.5 hours. I take the bus to Rio and arrive at 7pm. Lavandaria is closed of course, because they close at 5pm. How many laundry's survive only being open 9-5? So I buy some clothes to wear. This morning I go to the lavandaria at 10:30 and I hand over my clothes. It's only 30 Reals. 5pm tomorrow. Can you wash them by tomorrow morning? Não. She thinks I don't understand what she's saying. Amanha cinco tarde. It must take 16 hours to wash clothes at that lavandaria.

I wrote some horrible stuff on Saturday about it and here is the only part that is fit to print:

when you visit somewhere you are off put because it lacks x. you want the evil people to stop being evil. you want the good people to be happy, happier. so you write a letter and it sounds like this. what the fuck?

As usually I have met a bunch of really cool people in Brazil. The most interesting by far is the American lawyer who passed the bar in Brazil. He may be the only one.

For those who read too much Reddit, you've probably seen this fly to the front page: Nightclub fire kills at least 245 in southern Brazil. My heart goes out to those affected by the fire. I hope that this event will encourage more safety in construction of venues.