Yesterday I told my new friends the story of why I don't like nature. Before you start writing a passionate defense of nature, I think you should skim this blog. I have decided to retire that story. It's more than 15 years old and that is perhaps too long to still be good evidence against such a large and diverse subject as nature. Similarly, people, men, women, cities, corporations, dogs, criminals, bars, and governments cannot be written off so easily. That's right, even governments that are corrupt in hundreds of countries, countless provinces, states, counties, and cities cannot be completely written off. Why? Because power corrupts, governments that properly subject power to checks and balances can actually solve the problem. It's just that practically none of them have. Instead of rejecting the concept of government, why don't I just reject the notion of every government that has so far existed? Certainly, certainly I could do that. Then instead of an anarchist I would consider myself a minimalist and a perfectionist. That isn't easy to defend philosophically but it's at least fair to governments that may actually work somewhere. Reading a few paragraphs of Thoreau's Civil Disobedience again, I remember that my notion of anarchism comes from the sound philosophical tradition of nature. "...when men are prepared for it, that will be the kind of government which the will have." So let us use every available moment to prepare for it.

Nature is not all the same. Nature is by nature naturally diverse. The rain forest in Brasil is not the same as the rain forest in Western Washington. The fruits in Brasil are not the same as the fruits in Eastern Washington. This weekend I went camping to prove to myself that I could chill out with friends in a natural environment and leave the computer in my backpack. It was away not for 2 days but 3 and a half days: Saturday, Sunday, Monday, and half of Tuesday. But this isn't about not using the computer. It's quite the opposite, it's about living. Living, yes. I do pretty well at living in the city. I live at a Hostel for a week and I don't have many problems. Complaints, yes. Pains, yes. Culture shock, yes. But what about nature? What about rain? What about torrential rain? What about a trail that is generally difficult and dangerous? It wasn't that bad. It was actually pretty mild compared to what I did when I was 12 years old. Have I told you about my 80 mile ride repeated 4 times in 4 days at age 16? Anyway, during the hike I fell once and my wrist started hurting. Similarly in the city I grabbed a handrail in the metro and hurt my wrist. It's not nature that is dangerous it's statistically unsafe conditions. If you avoid them, you become phobic. If you engage in them, you are counting the hours before you injure yourself. If you are in nature for 4 days, the likeliness of getting hurt are medium. If you are in nature for 2 days per month, you are looking at a nearly 100% chance of getting hurt over the course of your years.

Avoiding danger is a good idea in moderation but it is not practical. The whole idea of telling impressionable children "Don't talk to strangers" is illogical. At some point they will have to talk to strangers whether the stranger is a classmate, a homeless person, a person at the bookshop, or the waiter at a restaurant. If you say, "Water, please," in United States of America, you could get water or you could get a question. I honestly wish that Brazilian waitresses would ask questions in a regular pattern so that I wouldn't have to ask someone for help, but every time they give me a new question I get the chance to show off how unique and helpless I am. Strangers are helpful. When you know how to order a meal at every restaurant you want to go to, you may not need help from strangers, but if they need help from you, it's great. "What a wonderful good deed I have done today to help a stranger!" you might tell yourself. But of course you should feel good about helping a stranger. They are in need and if it doesn't come from you, who? How much I have learned from people who are genuinely helpful, happy, and kind? A perfect society designed to welcome the foreigner that doesn't know the language may choose to speak an international language, but would totally miss the point I have stumbled upon here. People are naturally helpful. How do we bring this out in people where the society has a reputation of being unhelpful? Have you heard of the Rain City Superheroes? They have trained to be able to defend themselves against attacks from unruly criminals and walk the street so that people can feel safe even when people say that unsavory folks are about. If you've seen a video of them in action you can honestly say that what they are doing is haphazard situation management like a bouncer of the streets. If we have bouncers of the streets, why don't we have greeters? On Saturday the Free Hugs movement in Brasil hugged my friend and me. They are one set of greeters of the streets. Who else can we say are greeters of the streets? The person who has a lighter in front of a bar can be a greeter. Many people are addicted to smoking because of the friends they have made borrowing a lighter. How do you pick which person when asking a question? The person who looks like a local. There you go, look like a local in a tourist area and then when someone asks you directions, you offer to walk them the whole way. On the way you talk to them about anything they are interested in. How difficult is that? Not at all. How about the reverse greeter? I'm new in the area, could you tell me about this? If they are busy, they will say they don't know. It's nothing personal. If they help you out they may be interested in becoming friends.

But this is supposed to be about nature, right? We went to Simplão de Tudo for an extended weekend knowing that it would rain. It's the rain forest after all. Tents do not stay dry in the rain unless they are waterproof (expensive) and in a perfect situation. We had a tarp over the entrances to our tents and it was able to keep the center of our tents dry. The edges were wet. If we had dry gear and better tents I imagine that we would have been drier. I slept better than I have in weeks in Seattle. It's kinda strange to think that the loud and quite wet camp was more comfortable to me than my futon in my mansion in Seattle. Perhaps exhaustion had something to do with it.

On Sunday we walked from Simplão de Tudo to the waterfall. It was what I can describe to you as a jungle. Not a jungle like leopards and lions, but a forest dense enough to cause me pause throughout the entire walk. Worry and a poor mood do not suit a vacation well so a brave person can manage risks by simply doing the math. I knew that the odds of falling on my broken wrist were high but I went anyway. I fell on my broken wrist and it still hurt a day later. Will I go to the hospital or will I wait for the pain to subside? I waited. Rushing has never helped anyone who was not in serious trouble. As I found out at the two hospitals that I went to in Portland, OR and Seattle, WA, there is no setting the scaphoid bone (aka the navicular). They could put on another cast, give me some advice on how to stop using the darn thing, or they could tell me that the cast needs to stay on for longer. When I go to the doctor in Brasil in 2 weeks, I will ask for their honest opinion on whether I should stay in the cast. If I get the OK, I will make my wrist less mobile, and I will ride with my friends in Critical Mass in São Paulo.

Camping is an experience. It would be silly for me to skip it because I am convinced that it will shorten my life. Nature is a risk that must be managed like walking through a neighborhood with a bad reputation at night or riding a bicycle. How was camping? It was fun. The food was great (peanuts are tasty), the friends were fun, and the music was cool. Saturday they bicycled while I took a bus and car from Rio Grande da Serra to Paranipacaba and then to Simplão de Tudo. We met people that night, and danced. On Sunday, we went hiking to a waterfall. That night there was another rock show where we danced. I went to sleep early and my friends all sat in a tent (6 people in a 2 person tent) talking. Monday my friends made macrame and we sat on a big rock talking. That night we sang around a bonfire until we were rained out and sat on the covered stage singing. On Tuesday morning we struck the camp and went home. On the way home, we stopped at a nature guy's house. He built his house himself and was 70 some years old. He grows food sufficiently and has no electricity or water. Of course he was very happy and I think he had never met an American before despite his parents being European during WW2 (I think that's what he said). If we do the math quickly, a 75-year-old in 2011 was born in 1936, which is just before the start of WW2. WW2 ended in 1945, when he was 9-years-old.

Since many people skip to the bottom, I am putting cool links down here just for them. Occupy São Paulo, Kodiak Bachine, and the gallery. 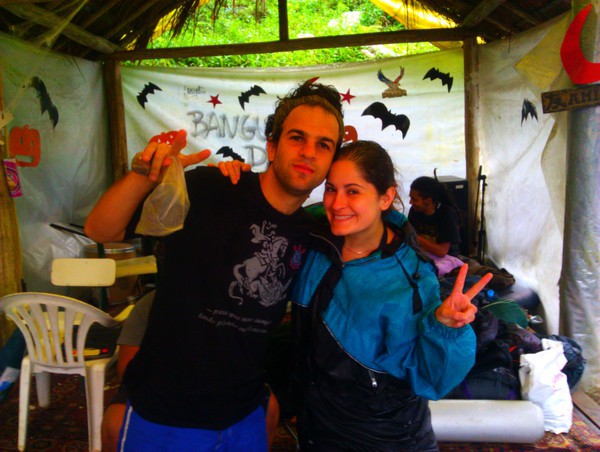 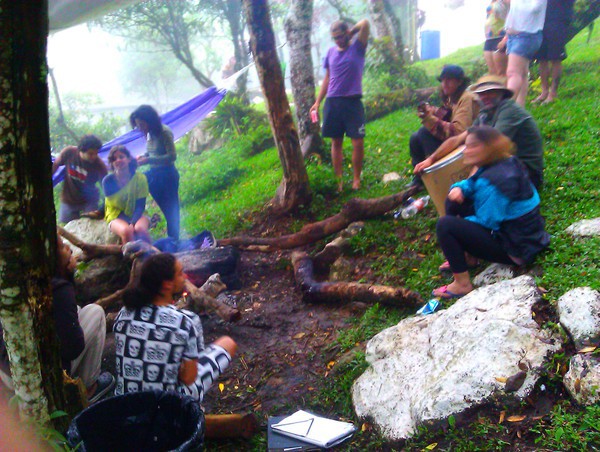 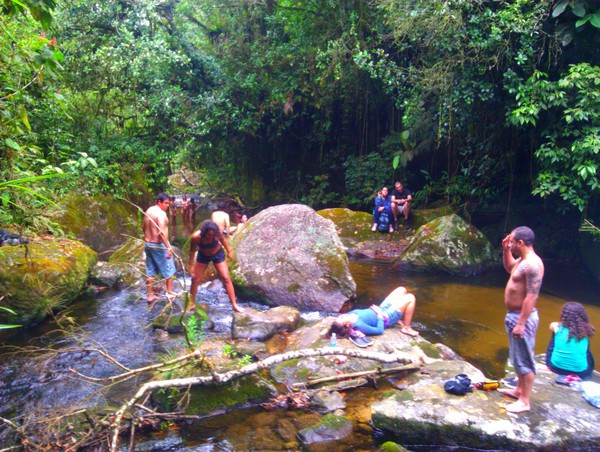 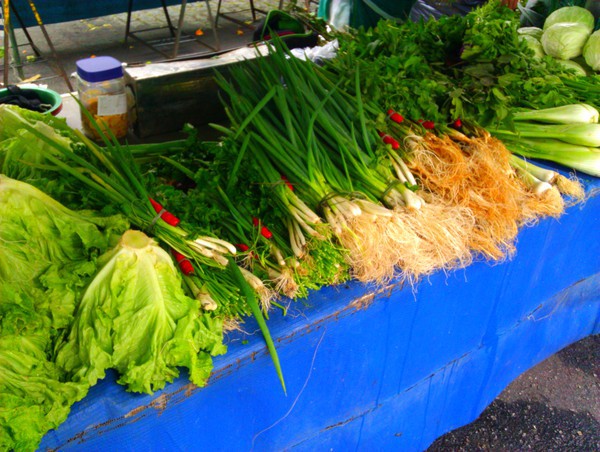 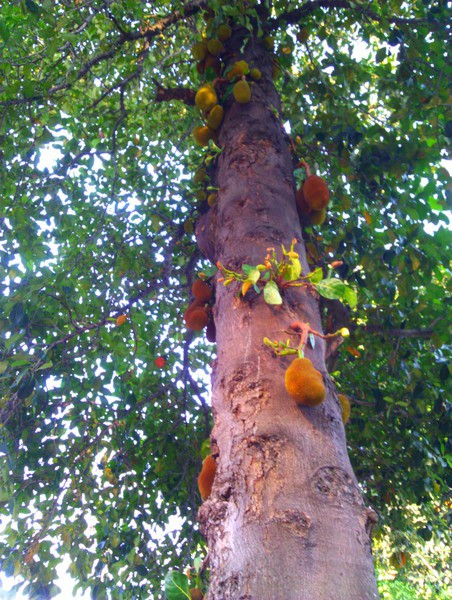 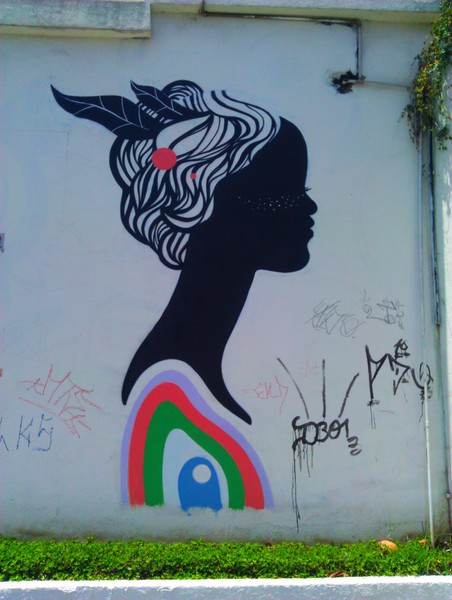